Altitude
80 000 m
Mass
16 kg
Max Speed
Mach 3.5
Launch
March 2024, Esrange, Sweden
Objective
Test transpiration cooling on a re-entry vehicle, which will be launched to an altitude of 80 km.
Patch
The space industry is moving towards sustainability. Private space companies such as SpaceX set the pace towards reusable launchers, while the “ESA - Clean Space” initiative sets on concepts like “in orbit servicing” and “active debris removal”. To reduce costs and therefore allow such projects, reusable spacecrafts are imperative. During atmospheric re-entry of spacecrafts, a heat shield is crucial. Currently deployed heat shields are either single-use and need to be fully replaced or need complex and costly maintenance cycles. Transpiration cooling offers an alternative to these established technologies and thereby enables the next step towards spacecraft reusability and sustainability. For transpiration cooling heat shields, no hardware replacement is needed and maintenance can be kept to a minimum. The costs of the heat protection system can thus be reduced. 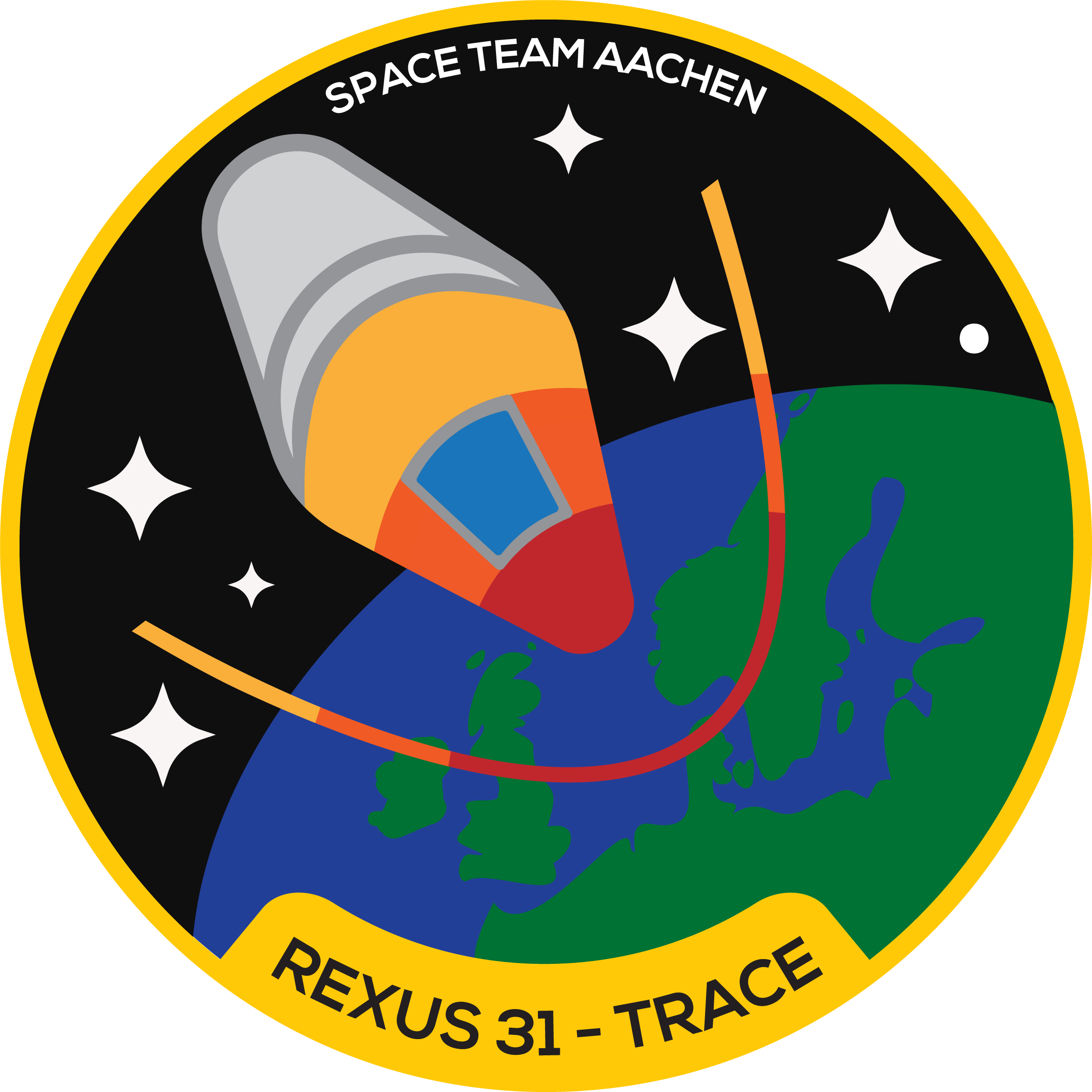 The TRACE free-flight experiment will be carried in the nose cone of a REXUS rocket and jettisoned at an altitude between 70 and 90 km, after which the TRACE capsule will fly back to earth independently. The experiment’s shape allows for passive aerodynamic stabilization during entry into the lower atmosphere as TRACE reaches speeds of up to Mach 3.5. At an altitude ranging between 30 and 10 km, the high velocity leads to strong heating of the outer structure. Part of the surface is equipped with new transpiration cooling elements, enabling a comparison of the surface temperature and heat transfer with reference surfaces, resulting in measurements of the effectiveness of the cooling effect. At an altitude of about 10 km, a parachute sequence for recovery will be activated.

Since August 2020, the TRACE team has been growing steadily and now has 20 members. The team is divided into 3 workgroups, the Mechanical Work Group, the Simulation Work Group and the Electronics Work Group. The team will continue to grow in the future in order to be able to cover all project tasks. This is also done in cooperation with institutes of the RWTH Aachen and the DLR. Two bachelor theses and one project thesis have already been successfully integrated into the project and further student theses are already being conducted in cooperation with SWL, DLR, SLA, ILT and ITA.

The REXUS/BEXUS programme is realised under a bilateral Agency Agreement between the German Aerospace Center (DLR) and the Swedish National Space Agency (SNSA). The Swedish share of the payload has been made available to students from other European countries through the collaboration with the European Space Agency (ESA).
Experts from DLR, SSC, ZARM and ESA provide technical support to the student teams throughout the project. EuroLaunch, the cooperation between the Esrange Space Center of SSC and the Mobile Rocket Base (MORABA) of DLR, is responsible for the campaign management and operations of the launch vehicles.
‍
The REXUS/BEXUS program, allows students of European universities to perform experiments on research rockets and balloons. The rockets carry three student experiments with up to 40kg payload to an altitude of 90km.
‍
TRACE will be Space Team Aachen's second experiment under the REXUS/BEXUS program after IMFEX and our team's first free-flight experiment.

TRACE is designed as a free flight experiment to test and evaluate the use of transpirative heat shields on a sounding rocket. The key to a successful experiment is to ensure the flight envelope allows for sufficient heating of the experiment surfaces. The concept of a free-flying experiment as a testbed for such a transpiration cooling experiment was laid out in the bachelor thesis “Design of a free-flight experiment to be carried on the REXUS mission” by Clemens Weitzel. It showed that high speeds in dense atmosphere allow such a free flight experiment within the flight envelope of a REXUS mission. Nevertheless, extensive aerodynamic optimizations of the re-entry vehicle are necessary.
Our proposed re-entry vehicle consists of a 15° cone with a rounded nose and an aerodynamically optimized boat tail. The experiment is designed to fit in the nose cone of a REXUS rocket and to be ejected after the rocket is despun. It will be passively aerodynamically stabilized.

The experiment itself consists of two reference surfaces and two transpiration cooling tiles. The forward cone will be split into four quadrants. Two opposing quadrants will house the transpiration cooling experiment with the two other opposing quadrants acting as reference surfaces. The entire forward cone surface will be made of PEEK, a high-temperature resistant thermoplastic polymer with the required properties to ensure sufficient heating of the reference surfaces. The transpiration cooling elements will be manufactured out of PEEK with a porous structure. They will be cooled cooling gas from inside the capsule. Besides the cooling system, the nose cone houses a set of temperature and heat flux sensors, as well as electronics for data logging, avionics, and system control.

For our mission goal, a full recovery of the TRACE free flying unit can be achieved by using a two-stage parachute system consisting of a drogue and main parachute. The experiment recovery starts at an altitude of 8000m. During the first stage, the boattail is ejected and the drogue parachute deployed. The parachute decelerates the experiment from supersonic to subsonic velocities. In the second stage, the main parachute is opened which slows down the TRACE free flying unit to a lower terminal velocity for landing. To facilitate the staging, the experiment has multiple points of separation.

Besides data storage, the TRACE free flying also contains an Iridium satellite communication module, a GNSS module, and a power management system to help with locating it after landing. It has enough power for at least 5 hours of transmission. The following graphic shows the estimated velocity on the re-entry trajectory.